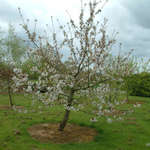 We offer a large range of fruit varieties that we have selected for their suitability for the South West of England. This means they are generally suited to all of the wet and windy western side of Britain, as well as the easier East. They are vigorous and disease resistant in most situations and suitable for growing without pesticide use.

In the following descriptions, the flowering periods for most fruit varieties are given in the RHS number category 1–7. Cider apples and perry pears are listed as Early, Mid or Late. However, bear in mind that these periods overlap. For example, an apple in group 3 will be pollinated by another variety in groups 2, 3 or 4.The best pollination occurs when there are two or more pollinators. Even self-fertile varieties set better crops if cross-pollinated. Pollination can be helped by planting other species of the same group nearby; for example, crab apples to pollinate apples or pear species to pollinate pears. The flowering period for certain rare fruit varieties may not be stated if we haven’t yet ascertained it.

Fruit trees flower at different times. Plums start first in March, then pears in April, and finally apples that go through May and some in June. As plums and pears flower so early, the best results are achieved with the tougher self-fertile varieties planted in a sheltered site. Pollination of all fruits can be improved by encouraging wild pollinating insects, keeping hives of bees near your trees and maintaining or planting good sheltering hedges to reduce wind speed. Remember, though, that too little air movement will encourage humidity and thereby scab infection.

As a rule of thumb, standard orchards in the South West are planted at 30 feet (9 metres) apart (about 60 trees/acre). Bush trees are spaced at about 15 feet (4.5 metres). Bear in mind that vigour varies between varieties, irrespective of rootstock. On the same rootstock a vigorous variety will grow bigger than a weaker growing variety. Both will grow bigger on richer, deeper soil on a sheltered site and smaller on shallow poor soil or an exposed site.

Our trees are propagated on the rootstocks listed below.We find these are the best suited to the soils and conditions of the wetter western side of Britain.

In the descriptions of the fruits, you will find a number category to suggest scab resistance for most of the apples and pears described.

Please note that these figures are a guide to help in selection. Individual sites will vary in their ability to encourage scab canker.